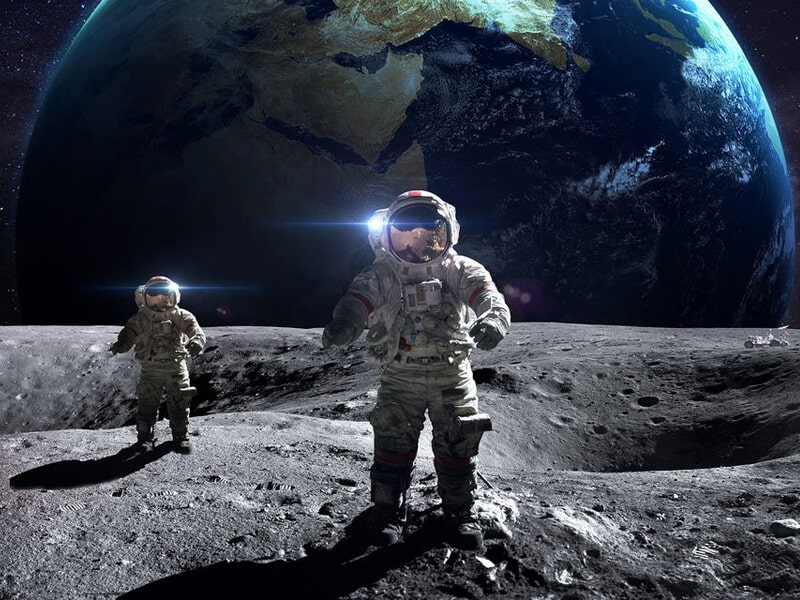 The threat of a cosmic collision is low today. It wasn’t always like that. Contrary to many catastrophic announcements, a collision between the Earth and a large cosmic body, such as a asteroid, is relatively unlikely.

Yes, events of this kind have happened frequently in the history of the Earth, but they have taken place over many millions of years. Therefore, the chances that in the near future we will be endangered by the danger from space are negligible.

But it wasn’t always like that. At the beginning of the history of our planet, between 4.6 and 3.8 billion years ago, cars, comets and asteroids were regularly falling on the surface of the Earth.

What is more, there have probably also been collisions with cosmic bodies the size of planets. It was precisely such a catastrophe that probably led to the ejection of large amounts of matter from the original Earth, which then formed the Moon.

As the newly formed Solar System matures and solidifies, such large-scale cataclysms became less and less frequent. The matter, which was not included in the planets, gathered in the asteroid belt, and all bodies, whose orbits crossed the Earth’s orbit, had already fallen to its surface.

It is believed that the strongest phase of meteor bombardment ended about 3.8 billion years ago. This assumption is confirmed by the research of the Moon, whose dead surface is not as rapidly changing as our planet, while retaining more information about the beginnings of its history.

What was found in South Africa?

However, the discoveries made on Earth seem to suggest that the falls of large fragments of extraterrestrial matter (impacts) occurred relatively often later, almost 2.5 billion years ago, i.e. until the end of the archaic eon. Arguments in favour of such an interpretation were found in southern Africa.

There are very old rocks on the surface, dating back more than three billion years! For comparison, almost all rocks found in Poland are less than 500 million years old, and the only important exception are granitides and red sandstones brought by the Scandinavian ice sheet, which are often about 1.5 billion years old.

In rocks these layers are additionally enriched with iridium – a rare element on the surface of the Earth, coming from space. These rocks document past falls of extraterrestrial matter. Large amounts of spheres and iridium testify to the fact that large cosmic bodies fell on the surface of the planet, with a diameter larger than the diameter of the famous asteroid that hit the Earth at the end of the Cretaceous.

Altogether, eight layers of evidence of past catastrophes were found in the South African rocks. These cataclysms have occurred in less than 250 million years. Thus, every 30 million years a very large car or asteroid fell on the surface of the Earth.

This frequency of huge cosmic catastrophes is much greater than in any later geological period. This illustrates well how rarely such disasters happen nowadays, when their frequency is much lower.

What were the consequences of these disasters? They have certainly caused huge tsunamis ravaging the land. This is evidenced by the very settlements in which spheres were found, as well as by the rocks lying above. They were created as a result of the tsunami waves.

Craters reaching to the interior of the Earth

Scientists also assume that the giant craters struck by asteroids reached almost to the lower boundary of the Earth’s crust, which today is at an average depth of several kilometers. At that time, however, it was thinner. In favor of the hypothesis of deep craters are the tiny grains of zirconium – a very resistant mineral found in small amounts in granite rocks.

In rocks rich in spheres, many old zircons were found, as old as 3.8 billion years old. They come from very old granite, which according to researchers must have been deep below the surface of the Earth, close to the lower boundary of the crust. Mining them to the surface was possible thanks to large craters and the breaking of matter from the depths of the planet over long distances.

Researchers also note that shortly after four large impacts at relatively short intervals (in the geological time scale of course, counted in millions of years) the character of magma rocks formed in the area of today’s South Africa has changed. Alkaline rocks, extremely poor in silica, have been largely replaced by neutral and acidic rocks – the second of which contain large amounts of silica and are typical rocks building today’s continents.

The change in the type of magma rocks was probably related to several large impacts. It is not possible to prove it yet, but the coincidence in time of the fall of large asteroids and the formation of new rocks, typical of continents, is puzzling.

If this was the case, it is possible that great cosmic catastrophes accelerated the formation of global tectonics, as we know it today – with many separate shell plates (stalls) moving constantly and subject to mutual collisions. In such an approach, cataclysms from the distant past would also have positive consequences, leading ultimately to the formation of the face of the Earth as we know it today.